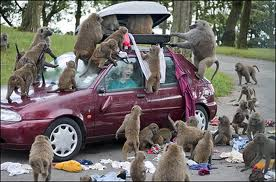 10.       Watch your children!  Most parents are usually quite cautious when letting their children play with their “toys” but a couple from Cornwall let their children play with their digital video camera well worth over $1,200.  The children got over ambitious at the beach and ended up burying the video camera in the sand to the point of it being untraceable.  After hours of searching, the camera was officially deemed missing and the couple filed a claim with their insurance company.  To everyone’s surprise, the insurance company paid out!

9.         Don’t be fooled by the cute monkeys!  One family found out the hard way that monkeys aren’t always cute.  While on a safari holiday in South Africa, the family had their personal affects taken off the roof rack of their vehicle.  The monkeys stole, ate, ripped and urinated on their property.  Due to the family’s negligence while vacationing, the insurance company did not pay out for this one.

8.         Watch where you’re going!  While on holiday in Athens, a young man became distracted and ended up walking into the wall of a bus shelter.  He ended up breaking his nose.  The man said that women sporting bikinis across the street from where he was walking was what distracted him.  Fortunately for his nose the insurance company approved and paid out his medical claim.

7.         Rain, rain, go away!  If you are looking for a “sun destination”, Scotland probably shouldn’t be your first choice.  One family vacationing filed a claim with their insurance company as they felt their vacation was ruined after it ended up raining the whole week.  As the rain in question fell under the umbrella of “natural force”, the claim was denied and not paid out.

6.         Hold onto your hat (and your teeth and your toupee)!  While vacationing on a cruise ship, an elderly man became sea sick and ran to the edge of the boat to vomit.  In doing so, he not only lost his cookies but his dentures.  The man was fully reimbursed for his dentures but the trip wasn’t the same with the limited dining choices of milkshakes and soup.  Another man, in a similar circumstance was denied when his toupee fell into the abyss.

5.         The attention is in the detail.  Here’s one good reason why you should double check your information before you hit the purchase button.  A British man neglected to check his information while purchasing flight tickets on the internet.  He wanted a departing flight from Manchester, UK but instead chose Manchester, New Hampshire, USA.  He was unable to board his flight and his trip interruption claim submitted to the insurance company was rejected.

4.         Let it Snow!  A British woman was finally able to book her dream Alpine skiing trip.  She was quite disappointed; however, to see no white slopes, just green hills.  The unusual warm winter had turned her dream into a financial nightmare.  She submitted a claim to her insurance company alleging due to no snow, her ski trip was ruined and she was seeking financial compensation to cover the trip.  Amazingly enough, her insurance company took pity on her and fully refunded her trip!

3.         Bombs away!  Sometimes it’s not what’s around you, but what may be coming down from above.  A family from Wales was camping when their trip was rudely interrupted by a parachutist who missed his landing target.  Instead the family felt the brunt of the land as their tent and equipment were damaged by his fall.  Unfortunately their travel insurance did not pan out for them as they did not have coverage for accidental damage.  Wh

2.         This one went viral!  Somewhat similar to the last story, a woman was on vacation in Sri Lanka and while at the beach, decided to find shade near a tree.  Minding her own business while reading a book, a coconut fell on her head which resulted in hospital treatment.  After numerous CT scans, blood tests, health care monitoring, etc., she was hit with a hefty bill.  The insurance company paid out.

1.         Keep your distance!  And finally, at number one is the story of a man who was on holiday in Gibraltar.  His expensive digital camera was stolen by a monkey with which he was trying to take a close up shot of.  The monkey suddenly reached up and grabbed his camera and made a quick getaway.  The insurance company paid out on his claim.